Tanks Giving is fast approaching! I am going to re-post several of the most popular Thanksgiving related posts over the next few days you help you get ready for the big feast!

Needing to develop some recipes for a couple of TV shoots coming up, I have been going through a lot of recipes.

This recipe for Steak House Yeast Rolls was a consideration but as I was working through the recipe, the realization that this would be far too complicated to do on Charlotte Cooks, my TV show on PBS in the Charlotte market. 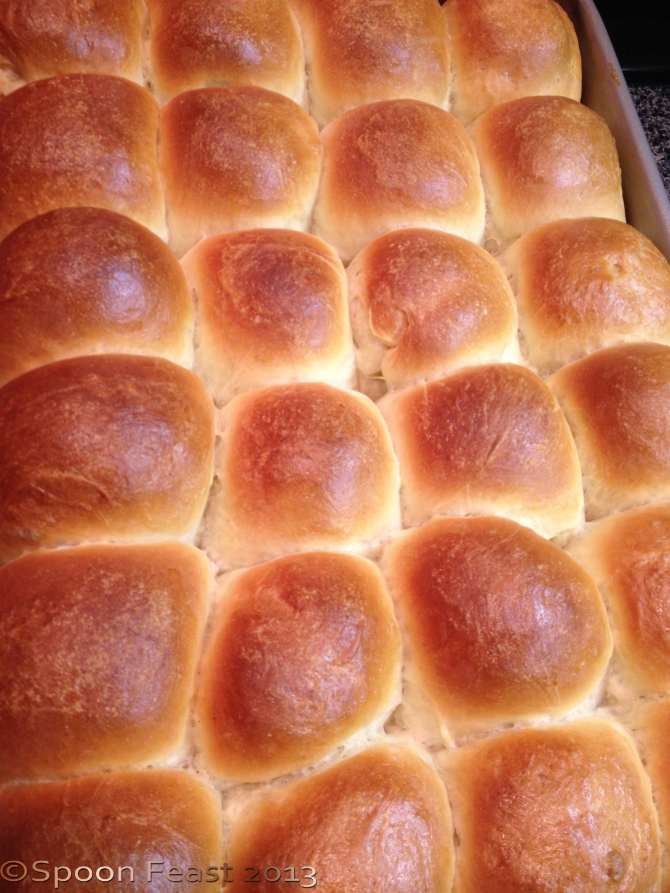 With only 26.45 minutes to fill, two 2-hour rising times, mixing, shaping, baking, making a filling for cinnamon rolls, icing, would take an entire season, not 26 minutes.

You have the pleasure of the recipe and variations, my neighbors will enjoy a slab of rolls.

Since I started taking a nutrition class a couple of weeks ago, I have seriously increased the awareness of what I am eating and what is in those lovely morsels I select to stuff in my face.

The dough feels great and gives your arms a work out.

Heat the milk and water to 110°F. Whisk the yeast into the heated milk and water. Let sit for 5 minutes, it should become frothy and bubble.

Add the butter, eggs, sugar and salt to a large bowl, whisk in the milk and yeast mixture.

Add the flour one cup at a time, creating a shaggy dough.

On a lightly floured surface, turn out the dough and knead until it is smooth and elastic. Form it into a nice round ball.

Butter the inside of a large bowl, Roll the dough ball to cover the surface with butter then place the ball in the bottom of the bowl. Cover with plastic wrap that has been also oiled to prevent the rising dough from sticking to the wrap as it rises. 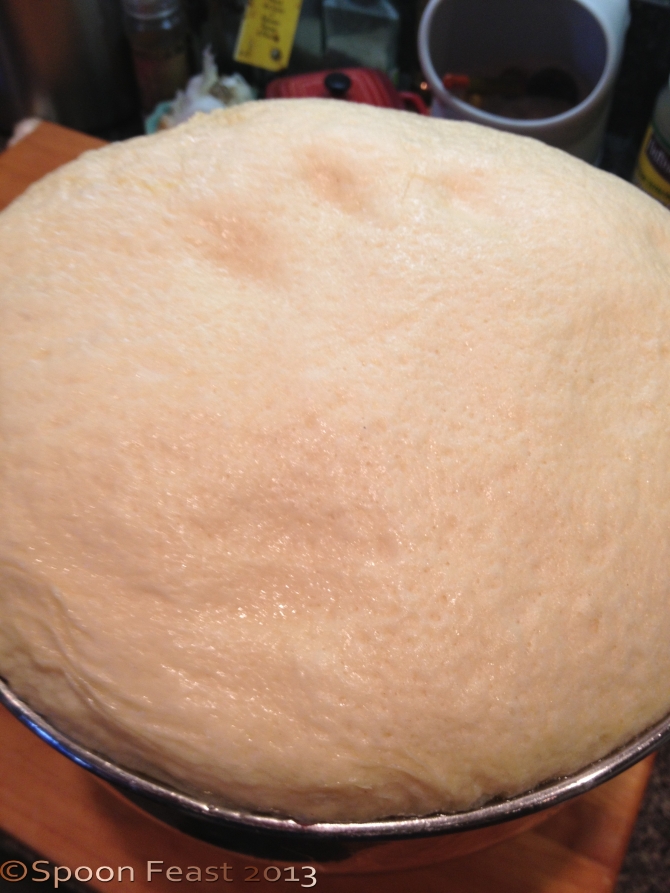 Allow to rise in a warm place until the dough has doubled in size. This may take 1-1/2 to 2 hours.

Punch down the dough and divide the dough in half.

Roll each dough ball into an even rope 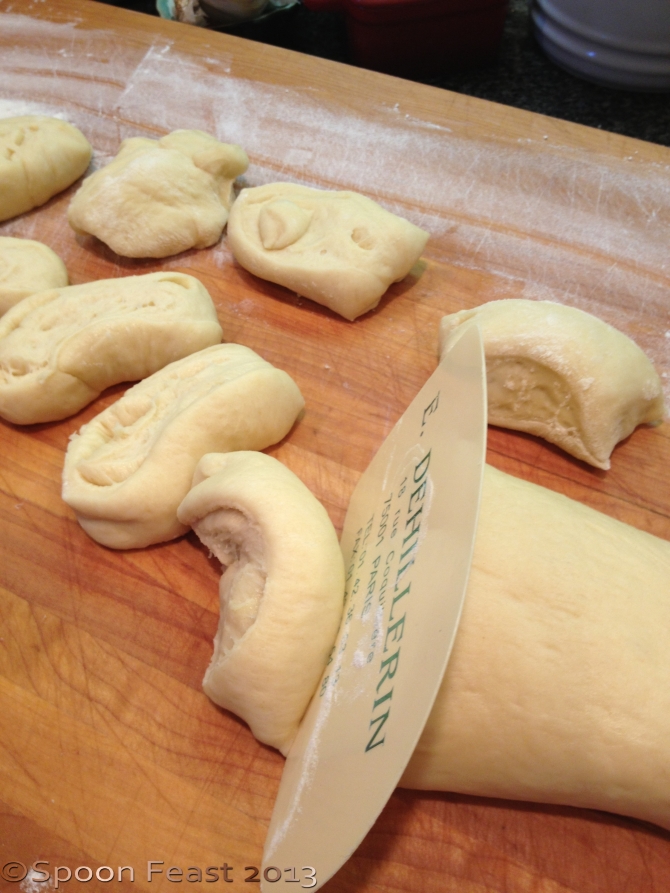 Cut and weigh for even size

and cut even size rolls. Weigh each roll to weigh 1.70 ounces. Lightly roll them to shape into balls.

Butter a 9 x 12 baking pan. Place each roll in rows 4 x 6, allowing a small bit of space between each roll. This space will fill in as the rolls rise. Cover with oiled plastic wrap.

Allow to rise again, until doubled in size. 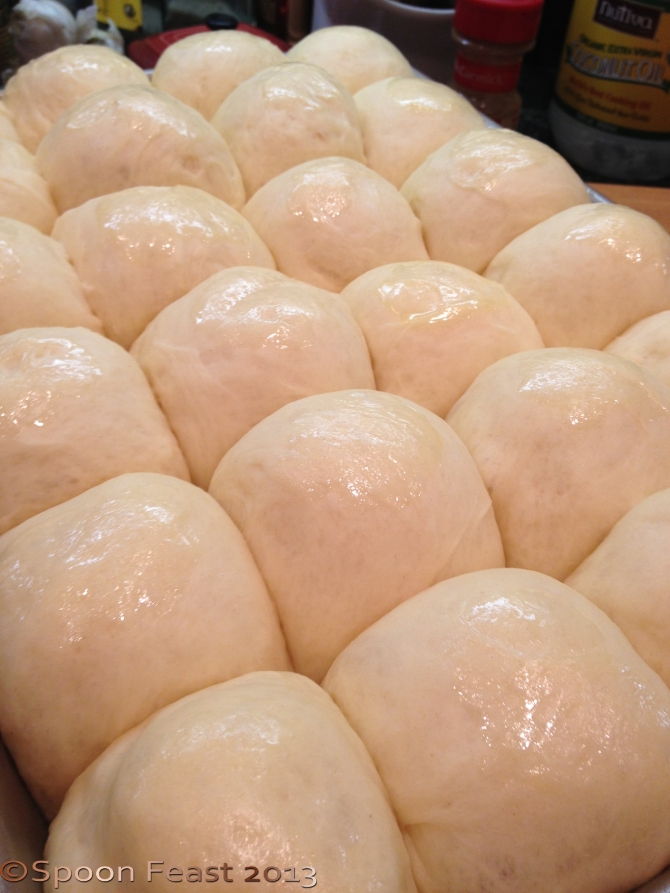 Once the roll pan is full, you will have some left over dough.

This dough is perfect for some amazing cinnamon rolls!

Roll the dough into a rectangle. Mix some soft butter with some brown sugar and cinnamon to make a paste. ( Make sure it tastes good.)

Spread the butter cinnamon mixture over the rolled out dough. Sprinkle the surface with pecans or walnuts.

Roll the dough into a tight cylinder. Pinch the seam closed.

Using a serrated blade, cut 2″ sliced from the roll. Place them cut side up (and down) in a well-buttered baking pan so the sides barely touch. 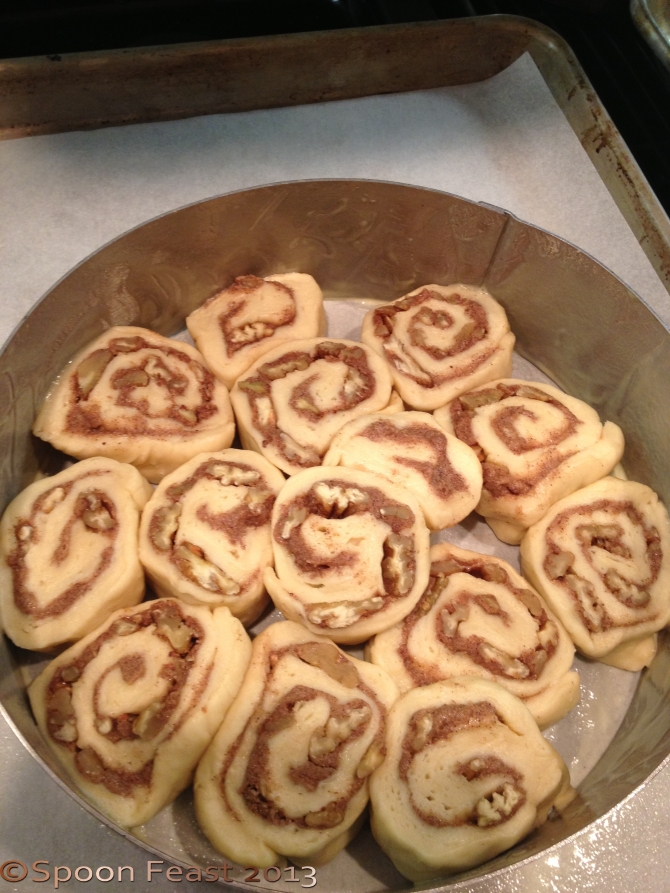 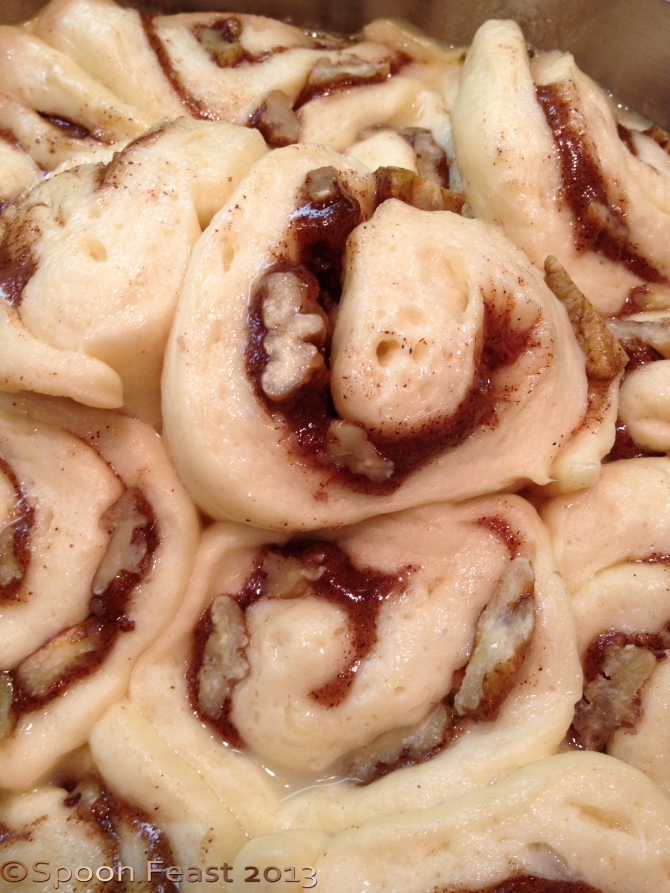 Use a pan large enough to fill with the sliced cinnamon rolls.

Allow these to double in size.

Mix 1 egg with water to make an egg wash. Brush the surface of the rolls with egg wash just before putting them in the oven.

Bake the rolls for 25-30 minutes, rotating the pan half way through for even baking.

The rolls are done when they are golden brown.

Remove from the oven and allow them to cool for at least 15 minutes before serving. 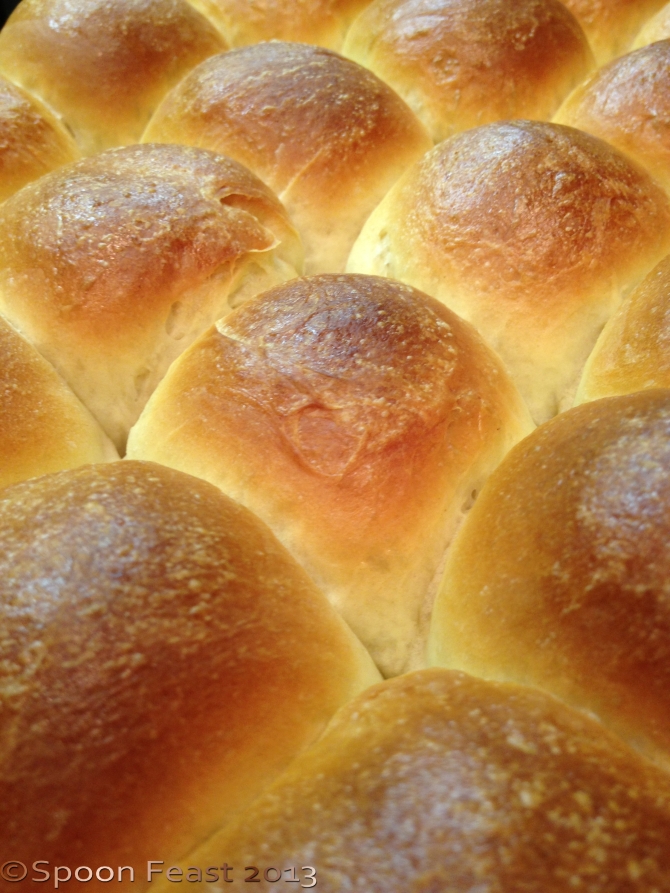